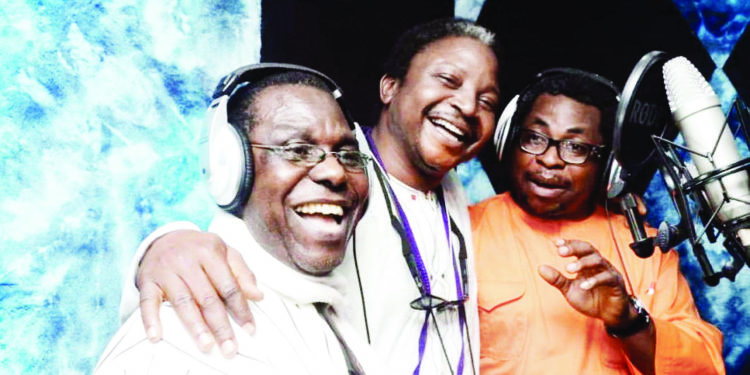 It was a historic moment when Concrete Communications hosted the virtual unveiling of 100 Songs, including the popular Aja Kubo, composed and performed by renowned culture activist and multi-talented artiste Benson Omowafola Tomoloju. The collection has been released via Google App. The unveiling, which was held in Lagos penultimate Saturday, attracted members of the Kakaaki Performing Troupe, friends, and colleagues from across the country, the UK, and the USA. It was meant to archive some of Tomoloju’s songs while promoting his cultural evangelism, Assistant Editor (Arts) OZOLUA UHAKHEME reports.

FOR about four hours, the Concrete Communications studio was alive. From video screening of selected songs of Tomoloju to reflections by few individuals behind the project and reactions from audience via webinar, the unveiling literarily turned into a huge reunion of sort and homage to the multitalented artiste.

A former Editor of The Guardian On Sunday and a member of Kakaaki that Tomoloju founded in the 80s, Mr. Jahman Anikulapo, moderated the session. Setting the tone for the evening, Executive Producer and CEO, Concrete Communications, Semoore Badejo, said the journey of the musical project started with him and Ewenla trying to generate publicity for the studio. He stated that since he had always loved Tomoloju’s Aja Kubo, written for the play Jankariwo, they decided to do it and send to the artiste for comments.

“He reverted with volumes of comments so we said the owner must come to do his thing. We felt he had done a lot and that we needed to document him. Some people don’t know him as a singer, and we thought we should showcase this icon. The first challenge was hoping he would agree, but when we told him, he said he would pray over it. He did and later got back to us. When we started, we were the ones running after him because of his pace. He composed and voiced all the songs. Here is an excellent product for you. If not for COVID, the unveiling would have been done since,” Badejo recalled.

He disclosed that the choice of app over CD was to make Tomoloju a citizen of the world without leaving Nigeria, adding that the N1000 cost to download the app was deliberate. “Our mission is to get across to the world. We would rather reach out to millions of people than a few thousand. The app is mobile literature; it comes with lyrics and the inspiration behind each of the songs. You can give people this app. It is not on i-phone yet, but it would soon be in about three to four weeks,” he said.

According to the Producer, Ropo Ewenla, the project was conceived as a means of expanding our collective memory. “There’s a tendency not to archive our products. Still, we hope this project will expand folkloric knowledge we can bestow to our children. This project is beyond music and art. It’s history, and we have not even scratched the surface. I’m happy and fortunate to be part of the project; it’s cultural evangelism, and this is just the beginning,” he added.

Project Coordinator, Mr Jahman Anikulapo said the essence of the project was archiving and letting people know that Tomoloju is the creator of the various songs that have been adopted by other artistes, the Kegites Club and white garment churches among others.

Overwhelmed by the goodwill and support from his younger colleagues, former Deputy Editor The Guardian, Tomoloju said that ‘the roles are reversed. These are the people who run my life; I don’t know why they are calling me their teacher. I don’t know what to say because some of it might sound like self-adulation. But, it’s exciting for me to go back in time and scoop out some of my old works.’

“Not only scoop them out but process them into some exciting form of music that I call eclectic. “Why 100 songs, you may wonder? I want to be empathetic to students who come to my house or theatre base to make me sing directly to them when they wanted to do my theatre productions. They travel from all corners of the country. Now, they can have these songs. They are songs from about six or seven plays of mine.

“I expect people in Jamaica; Brixton or where is it, to connect because the reggae we produce here in Africa is not copied reggae, it’s authentic reggae. You find reggae in our local symphonies, percussion. You find that some of the Orlando Owoh music productions are reggae based. But, I must tell you, I love reggae,” he said.

He recalled that some of the songs were composed for ‘my students as a form of cultural pedagogy in the educational process. This was at Saka Tinubu Memorial High School, where I started as a teacher. I also adapted novels, particularly of Peter Abrahams to drama and we also produced Soyinka’s ‘The Trials of  Brother Jero’. Some of these songs came from when I was teaching, and I used them to minimise tedium that literature was for students in those days. And having internalised some, they respond spontaneously.’

He used the occasion to reiterate that the late Reggae star Ras Kimono never offended him for adopting his song Aja Kubo.  He said the late reggae artiste never offended him because he took permission from him to use Aja Kubo as one of the tracks in his hit album. He stressed that Ras Kimono is not here now but that he came for authorisation which he gave him urging that the matter be laid to rest. According to Tomoloju, art is dynamic and whatever came from Ras Kimono is a ‘manifestation of the dynamism of art and we have to align ourselves with that reality.

“On issue of copyright authorisation, I have appealed to people about Ras Kimono. At a point in Maryland, Lagos under the bridge, he saw me driving and his driver overtook me and he stopped and said, ‘Uncle Ben there are things we want to talk about but take it easy’. Forget about all these things that people say, he really meant to pacify any situation that he considered critical about him and I appealed to people that this controversy should cease.

“Ras Kimono is not here now, he came for authorisation and I gave him. But, trust journalists. If I were in the position of late Wale Olomu, I would have done the same. I would raise a storm also. So, let the matter rest. Art is dynamic. Whatever came from Ras Kimono is a manifestation of the dynamism of art and we have to align ourselves with that reality,” he added.

He also noted that he wasn’t angry with the Kegites Club for adopting the Kakaaki anthem. “I can’t be angry; I was ‘Fellowrised’ at Unilag,” he said, adding that he does music “for love, not for any special honours.”